Welcome to the parish church in Alflen / Eifel

The parish and church in Alflen

The first church cult building in our wider area was built in Trier in the 2nd beginning of the 3rd century. Remains of this first church under the cathedral ...

The two figures on the high altar ...

... asked Pastor Koschel from his ministerial brother in Boos.

This represents an apostle with a gospel book.

Fourth picture on the north side

Saint Wendelin as a shepherd - patron of the shepherds and cattle

Third picture on the north side

The beheading of John the Baptist

Jesus is condemned to death

Crucifixion group above the choir arch

Second picture on the north side

Moses consecrates Aaron as a priest - Interpretation: sacrament of ordination
"He poured some of the anointing oil on Aaron's head and anointed him to consecrate him."

Cloister - Jesus is nailed to the cross

First picture on the north side above the Marien Altar

The prophet Nathan before King David - interpretation: sacrament of penance
"The Lord has forgiven you your sin"

Archangel Michael with the soul scales ...

Figure from the old pulpit

Fourth picture on the south side

St. Donatus blesses the village of Alflen during a thunderstorm

Lay brother of the Redemptorists † 1755

Patron of children and mothers

... and placed in his mother's lap

... and placed in his mother's lap

The new figure of John

Thanks to private donations and the tireless commitment of the parish, the new figure of St. John was inaugurated in a solemn procession in the parish church of Alflen in 2013.

The figure was made by the woodcarver Josef Formella from Lutzerath.

The two figures on the high altar ...

... asked Pastor Koschel from his ministerial brother in Boos.

This represents a bishop or cardinal.

Cloister - The holy body of Jesus is ...

Figure on the high altar

Third picture in the middle

God leads Adam to his wife - Interpretation: sacrament of marriage
"And the two will be one flesh. So they are no longer two, but one."

Patroness of women, mothers and miners

Second picture in the middle

Manna rain and water miracles - Interpretation: Sacrament of the Eucharist
"He gave them bread from heaven"

Watch the video with Google Approach

Here you can watch the complete 3D tour as a video

Third picture on the south side

Martyrdom of the Apostle Bartholomew

Photo taken around 1940 - the deformed pipes are easy to see

Cloister - Jesus is stripped of his clothes

The artist and his work - Heinrich Alken from Maye

Sculptor, painter and teacher from Mayen

First picture on the south side above the Bartholomew altar

Samuel anoints the young man David as king - Interpretation: Sacrament of Confirmation
"And the Spirit of the Lord was upon him"

Virgin and Martyr in the 3rd Century

Patroness of eye and dental problems

From 1750 to 1942 the "death bell" was located in this roof turret, which at that time had rung more than 4,000 deceased to rest.
The bell was confiscated in 1942 and melted down for weapons production.

It is thanks to the "Totenglöckchen" interest group in 2010 that a new bell was purchased.

Cloister - Jesus dies on the cross

First picture in the middle

The baptism of Jesus by John - interpretation: sacrament of baptism
"This is my beloved son that I liked"

Descriptive texts for paintings come from this very informative book. Thank you for making this 3D tour even more extensive.
[More on this ...](http://wiki-de.genealogy.net/Neubau_der_Pfarrkirche_Alflen_vor_300_Jahren)

Second picture on the south side

The healing of Tobit by his son Tobias - interpretation: anointing of the sick
"You should see again. Your faith has helped you." 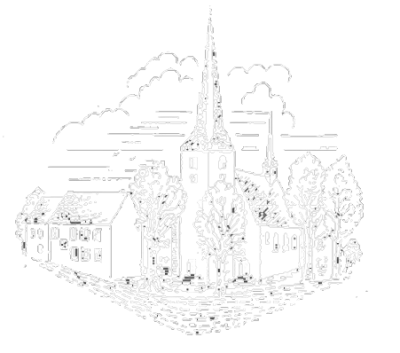 On the history of the church
The parish church of St. John the Baptist, with its Gothic style and its unusual ceiling paintings, is one of the most remarkable churches in the area. The substructure of the Romanesque west tower, upper floors and nave were renewed after 1716, the late Gothic choir and sacristy were renewed after 1716. The location of the church, which is surrounded by mighty chestnuts that are more than 300 years old and protected by nature, offers a picturesque picture in every season. You can get this view especially from the Zeip (a fountain) in Schulstrasse, near the school.
(Source: Wikipedia)

In the bell tower

View from the gallery left

View from the gallery right

Looking towards the entrance 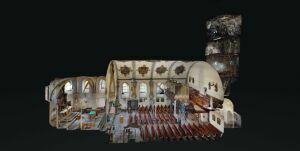 Do you like this virtual tour? We would also be happy to implement your project.
More ...